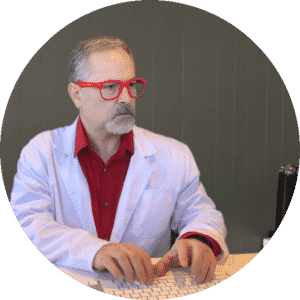 For this week’s special Q&A session we moved to the United States to meet Jason Newmark, Vice President of Production at Crazy Tooth.

Crazy Tooth Studios is a software house born in 2011 in Nevada, USA. Initially in the slot machine market for land-based casinos, they soon specialized in online gaming software. For ten years, their mission has been to provide high-performance and innovative games with the aim to provide satisfaction to the customers. Crazy Tooth creative team members call themselves “game design scientists” and they even have a YouTube channel where they show the behind the scene of their work.

Today thanks to this interview with Jason, we can find out more about this provider, from the bizarre name to their slot machines and some anticipation on the production.

Hi Jason, we really appreciate you taking the time to have a chat with us. Let’s start with the origin of your name, which is quite unusual for a software developer. How did the idea of using “Crazy Tooth” come about?

The first game we ever made was called Choco Choco™ and it featured our president, Ben Hoffman’s dog, Choco. Choco has a crazy tooth so….there you go. And I’m happy to say that Choco, our faithful mascot, celebrated his 16th birthday this year!

Which slot machine in your catalog has been the most successful and which one deserves more attention from the public?

Well, of course, I’d like to say that ALL our games are successful, but Aureus™ has been one of our recent hits. We just had a pretty successful launch with Lucky Clucks™, so that one looks like it is on its way up there. One that I think deserves some more attention is Fortress Charge™. I really like that one – everyone should check it out!

According to your experience, what are the biggest challenges that a new game developer generally has to face today to be successful?

That’s a good question. Despite being in the business for ten years, I still feel like I’m relatively new to the industry myself. The challenge is always “what do players want?”. I feel that we strive to make games that, as players, we would want to play ourselves. So peering into our crystal ball of what players want to play and then coming up with a brand new idea that fits in the box, yet is outside of the same box (if that makes sense) – that is a challenge. Albeit a fun challenge!

What special feature in a slot is most appealing to a modern player?

When we were designing for the land-based market, we always gravitated toward “pick” bonuses. People liked to interact with those big screen in the casinos. When we switched over to the online market, we quickly realized that players seem to prefer free games over picking. So we have definitely embraced the free games scenario. Also, we love making games where the wins can really build like our Big BuildUp™ and Respin Insanity™ lineups. Those games can give players some pretty explosive wins, and they seem to be doing well with players.

On your Youtube channel we see your creative team dressed as scientists looking for inspiration for new games. How would you describe your creative process in reality?

The collaboration of the entire team has always been a hallmark of Crazy Tooth’s creative process. Every single member of the team is involved in all the creative decisions of every game. We generally have an initial brainstorm meeting where we come up with an idea – usually coming up with a new mechanic idea and then coming up with the theme. Then during the design – every symbol, every character, every background is put under the microscope by the entire team. As are all the animations. Then there’s the math and what we call “the ride.” We play and play and play and have lots of meetings about how the game feels as far as the ride and what players will be experiencing when they play. Does it keep the player engaged? Does it remain exciting after a long play session? Is there an anticipation of the “really big win?” We really put our heads together to make our gameplay and exciting experience for our players. We take every aspect of every game very seriously, even though we like to portray ourselves as goofy game scientists in our videos!

On your website we read that part of your mission is “encouraging innovation”. What is your idea of innovation when developing a slot game?

We approach every new game as a completely fresh and new challenge. We love coming up with brand new mechanics and even on games where we use an existing mechanic, we try to add or tweak it from the previous version in that lineup. We love the idea that every game that we make is something completely new to the industry, so we strive for that innovation with every new game. We love that challenge and are constantly pushing ourselves to come up with something new and exciting.

What are your plans for the future? And what about the next releases?

We always have a couple tricks up our sleeves. We are currently working on some games with brand new mechanics and we have another Respin Insanity™ game coming soon! Golden Hook™ will launch in December, which features our WiNCREASE™ mechanic that we introduced with The Incredible Balloon Machine™.