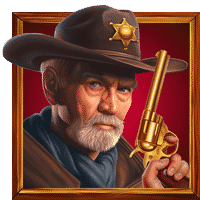 Are you a fan of Clint Eastwood? Do you fancy yourself as a whiskey drinking, gun toting outlaw? Then Booming Gaming have the game for you. Their new release, Bang Bang, is an exciting new creation in the American West genre, with all the normal touchpoints of Westerns, including six shooters, cowboy boots, tobacco spittoons and of course vigilante justice. The game is set in one of the classic locations for this genre – the saloon, where criminals gather to play cards and look suspiciously at any newcomers to their bar.

Features for this game include a cascade mechanic, a growing multipliers bonus and a free spins game. Joining these bonuses is the ever-present wild symbol which helps players by substituting in for other symbols to help form wins. The multiplier bonus on the other hand starts at 1x and then grows with every successful cascade triggered. All features will be explained further on in this review.

The theme as we have already established, is a textbook American West theme. This may be one of the all-time most popular themes of online slot games and indeed gambling in general. That being said, at least Booming Games have done a nice job of this one with well-illustrated symbols, a detailed background and a ripping soundtrack that fits perfectly with the high-paced action in the playing window.

The background for this game is the rough and ready saloon bar that the local varmints come to whet their whistle at. It is a two-floored establishment, the first floor being the saloon area, where patrons may drink beer and whisky until their heart’s content. The second floor, illustrated by the balconied mezzanine area above the bar however, (if Spaghetti Westerns are to be believed) is the halls of residence for the local ladies of the night.

The board on the other hand is more of an extension of the bar window itself, made from the spare railway sleepers of the nearby train line. Its construction fits perfectly with the rest of the environment.

The symbols as is usually the form for online slot games, are split into high-paying, low-paying and specials. The low-paying symbols comprise the A, K, Q and J in card royals. The higher paying symbols on the other hand are the various gunslinging characters. These include the suspiciously Scarlett Johansen-looking character with a revolver in each hand. Joining her is the older gentlemen, also brandishing a firearm and a masked bandit pointing his shooter out in front of him. The specials are comprised of the wild, which is another cowboy with the word ‘wild’ inscribed across his face and the free spins bonus scatter, which is the sheriff’s badge.

Bang Bang is played on a 5-reel, 3-row playing board with 20 fixed pay lines. To create winners in this game players must match 3 symbols in combination from left to right on the reels. To change your betting level per spin, use the bet adjuster tool located at the bottom of the playing window. The betting range for Bang Bang is 20p to as much as £200 per spin.
Further information regarding the slot, including a display of the paytable, can be accessed by clicking on the settings menu. The spin button is located to the right of the reels. You can set up auto spins in the game’s menu.

The volatility for Bang Bang is rated in the higher range of the spectrum. The return to player percentage for Bang Bang is 95.98% which is just below average. The biggest payout that players can win on one spin is 2,309x x your total stake. 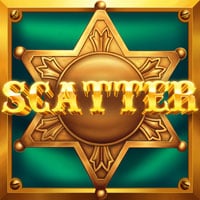 One of the major features of this game is the cascade mechanic. This bonus is triggered every time that a win is made. It removes the winning symbols from the board and replaces them with new ones from above, giving you another chance of scoring a win from one spin. The cascade feature will continue until the new set of symbols does not bring a win. A pay out will follow the losing cascade.

Next on the feature list is the multiplier bonus. You will notice that on top of the reels in this game there are sheriffs’ badges which indicate various multipliers. Every normal spin begins with a 1x multiplier, which is applied to any initial wins of a round. However, for every successful consecutive cascade that you land, the multiplier will grow by 1x. The top multiplier available in the base game is 5x.

This game also has a wild symbol which helps form wins by stepping in for other symbols barring the scatter.
Finally, this game also has a free spins round. To trigger this bonus, players must land 3 or more scatters on the reels at the same time. The number of scatters that you land determines the number of free spins that you are granted. The multiplier bonus is also available in this round, but the top multiplier is higher in this round, reaching 15x your win.

As fun as a Wild West slots often are and as potentially lucrative multipliers can be, Bang Bang does not fulfil all of our criteria for a truly outstanding slot. One of the main drawbacks is the pitifully small top pay out which offers little incentive to gamers looking for a decent return on their investment. A solid but not overwhelming success by Booming Games.

What is the maximum bet you can lay down for one spin?

What is the volatility rating for this slot?

The volatility rating for Bang Bang is high.

Is there a wild in this game?

Yes, it joins a collection of other great features.

What is the max payout for this slot?

The top payout for Bang Bang is 2,309x your stake.

Which slot provider created this game?

This slot was created by the Booming Games studio.

for playing with Bang Bang: