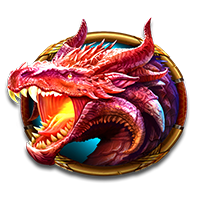 Dragon Kingdom Eyes of Fire is the latest fantasy slot from the developers at Pragmatic Play, and although the name may have you thinking that it is a book in a multi-volume epic, the title refers to a slot that is full of dragons and their eyes. Alongside these two you will find the usual dead spin collection system that activates multipliers and eventually producing some modest wins for you. Over the past few years there has been an influx of dragon themed slots however few have been played out using the 3x3.

You will see that there is a fourth reel, but this is special as it holds the multipliers that you can trigger at certain points in the game. The main game play takes place on 3-reels and 5 pay lines to land your winners on. The rest of your game screen is used to bring home the theme which is a cold blue cavern that is lit and comes complete with a plethora of cold coins and other bits of treasure. This slot is not dripping with riches but is does offer you an accurate representation of what you can expect. Therefore, if you are ready to start at adventure with Dragon Kingdom Eyes of Fire read on.

There is a great deal of similarities between Aztec Gems from the same developers, however I am pleased to say that it is not a clone as such. One area that both games differ on completely is the volatility where this slot has a rating of 2 out of 5 which sees it in the low to medium category with the default return to player also being slightly lower, but with this standing at 96.5% which is higher than many competitor slots so overall incredibly good.

When it comes to play, the first thing you need to do is to choose the stake that you are most comfortable playing with, the bet range starts from a minimum of 10p per spin and a maximum of £25 per spin. Although this is a fair bet range it may not be that popular with the high rollers. The maximum bet is rather strange as the developers at Pragmatic Play have used a lower amount that the usual maximum bet their games offers is £100, and they usually only use the low cap for the high volatile and high potential games. Regardless of this when you change your bet level it resets the Progressive feature that we will look at below. 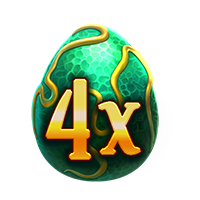 When it comes to landing wins the only permissible combinations are three of a kind winners and these come from the seven regular paying symbols. You can expect to come across the usual lower paying symbols that are the card suits with gems and comprise of clubs, diamonds, hearts, and spades and these are worth from 0.4x to 1.6x your bet.

The higher paying symbols are made up with blazing sevens, red and blue dragons which are worth 2x to 4x your bet. This means that landing a full screen of the highest payers will only provide you with a return of 20x your stake. However, it is not all that bad as winning combinations have the benefit of the fourth reel multipliers when they are in active play. The wild is the represented by the eye of fire symbol and does not only substitute the pay symbols to provide you with winning combinations but it is also worth 5x your bet so you can try and get a little extra value out of it this way.

Surprisingly, there is just one feature on offer when you play Dragon Kingdom Eyes of Fire and this is the Progressive feature that we alluded to earlier. This feature sees you having to collect dead spins a.k.a non-winning spins. Once you have landed four spins in a row with no wins the fourth reel that is positioned on the right side of the slot springs into life and displays dragon egg symbols only which carry multipliers. The more non-winning spins you land the greater the multipliers on the eggs will be.

Dragon Kingdom Eyes of Fire will appear familiar if you have played the slot Aztec Gems as the two slots operate in a similar way. This slot is all about landing the most valuable symbols at the same time as you activate the fourth reel with its multiplier values. This slot really takes the multiplier in a completely new direction however the two slots are comparable. Dragon Kingdom Eyes of Fire is less volatile as Aztec Games and not only does it provide you with higher potential the dead spin collection mechanic adds a completely new dimension.

Whilst testing this slot I seemed to return to the starting balance again and again, with my balance taking a real battering when nothing was happening, then completely out of the blue I would land a decent multiplier win. Technically, there are wins worth 1,250x your bet possible in a single spin however you do have to land a screen full of wilds and the 50x multiplier. I enjoyed playing this slot but must mark it down a little as it can become rather repetitive, even so it would be a solid 6/10.

What is the RTP % in Dragon Kingdom Eyes of Fire?

The slot has an RTP of 96.5% and is considered by the developers to have a low-level volatility.

What is the maximum win available?

Is there any free spins in Dragon Kingdom Eyes of Fire?

No, the slot does not offer a free spins feature.

Can you play Dragon Kingdom Eyes of Fire for free??

Dragon Kingdom Eyes of Fire can be played in a demo free mode at many casinos.