Eye of the Storm™

Overview Eye of the Storm

Eye of the Storm is due to release on 8th February and is the latest collaboration between Pragmatic Play in partnership with Reel Kingdom. This slot is reminiscent of the classic slot Eye of Horus from Merkur/Reel Time gaming which became famous for the symbol upgrade mechanic that plays out in the free spins. Eye of the Storm does include this feature which is polished to perfection. 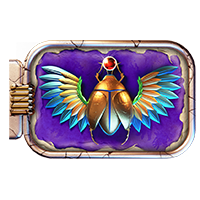 When it comes to the visuals these set the two slots apart and provides a true distinction between both slots. The imagery is far more colourful and not the predominate brown imagery that is seen in Eye of Horus. The reels are surrounded by temples, pillars, and stunning pyramids in the distance. This Ancient Egypt but not as you would know it. Typically, you would expect a sunny world with clear skies and a feeling of goodness that you would feel if you were to drift down the Nile. The clue for this slot is in the name, Eye of the Storm and it does provide a completely different feel, this slot is heavy with dark clouds moving across the screen whilst the lightning flashes to provide the menacing feel that war is about to break out. The mood is deep and completely different to any other slot you will have come across to date.

When it comes to the game play the slot is plays out using 5-reels and 10 pay lines. The default return to players stands at a remarkable and generous figure of 96.71% which is far superior to competitor slots. Despite this the volatility is classified as high therefore you will probably need patience as you may come across a lot of sand before the oasis appears and wins start to come in. When it comes to placing your bet, the minimum starts from 10p per spin and a maximum of £250 per spin which is a bet range that will suit those on a limited budget and keep the high rollers entertained too. 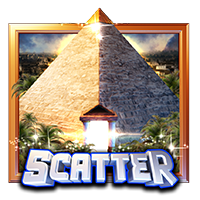 The rewards in Eye of the Storm begin when you land three or more matching symbols starting for the reel furthest on the left. The symbols are interesting and although they do have a familiar look to them, they have received a high standard graphical upgrade. The lower paying symbols are the usual playing card symbols Jack through to Ace and these are then followed by the higher paying symbols that comprise of folding fans, scarabs, Ankhs, jackals, birds, and the Eye of Horus.

When you land five of the premium symbols you will be rewarded with 20x to 50x your stake. The wild is the symbol that has had the most startling make over and it is represented by a priestess, warrioress, or queen it really could be any of them or a mixture of all three. The wild will appear on your 2nd, 3rd, or 4th, reels where it can assist and create winning combinations. and when it can form a winning combination, and when it does it can expand to fill the entire reel.

There is another feature on offer in Eye of the Storm and this is the free spins which are complete with a symbol upgrade mechanic. The feature is activated when you land three or more of the scatters which are depicted by the pyramid symbol and by doing so you will be rewarded with 12 free spins. There is also a cash injection on offer between 2x, 20x, or 50x, your bet when you land 3, 4, or 5 scatters that have activated the feature.

Whilst playing in the free spins, when you land 1, 2, or 3 wild symbols they can expand and award you with an additional 1, 3, or 5, free spins as well as moving the game up 1, 2, or 3, levels. Every level upgrades the premium symbols, as follows the first wild upgrades the folding fans symbol to the Ankhs, the next wild will turn the Ankhs symbol into the scarab symbols. The scarab symbol becomes the bird, the bird becomes the jackal, and this continues until the only premium symbol of the reels is the most valuable Eye symbol. This of course significantly increases your chances of landing the high value combination of symbols. Finally, you can reactivate the free spins feature when you land a further three or more scatter.

When it comes summing up this slot, the biggest difference is that this slot is more modern when it is compared to competitor slots and offers some superb graphics when compared with the original slot. However, they do say that beauty is in the eye of the beholder so this is the type of slot that you will either love or hate and will come down to personal preference. The major difference will stand at whether you are a fan of the leggy warrior over the traditional 2D image of a deity. There are also the statistical changes, with the return to player being the most positive particularly if you play at a casino that is offering the highest setting, this is also appreciated by the high rollers as they will appreciate the ability to set higher stakes should they so wish.

Eye of the Storm is a great slot to play however as there are so many similar slots you do have to ask yourself whether there is room and whether there is the need for another similar slot. There are various developers that have taken on this theme and the team at Blueprint Gaming and therefore it is no surprise to see other developers following in their footsteps. It could be compared to travelling to a different world where things are the same but not really.

This is one slot that will entertain fans of Egypt and those who have not played the original. The increased return to player is also a huge positive too. I enjoyed playing this game immensely and would rate it as a solid 7/10 and recommend all players to give it a spin or two.

How many symbols are needed for a win?

The minimum win is created by three or more symbols.

How many symbols are used in this slot?

There are 10 symbols plus a scatter and a wild.

Which developer produced Eye of the Storm?

Pragmatic Play in partnership with Reel Kingdom produced this slot.

When is the slot due to be released?

The release date for this slot is 8th February.