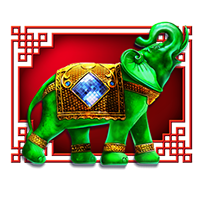 Pragmatic Play have joined forces with Wild Streak Gaming and are pleased to announce their new slot collaboration Temujin Treasures which is due to release later this month. Having already released many successful Asian slot titles the developers have chosen Genghis Khan as the main character in this slot. Unless you are au fait with the history of the Khans you probably do not know that Temujin is the original name of Genghis Khan one of the most notorious and successful historical conquerors. Whilst Genghis is known as a ruthless leader, Temujin Treasures shares the warmer side of this king amongst men who will reward you highly if you find your way into his good books. So, if you are ready to join this fearless warrior read on.

Genghis was a strong man who ruled with an iron will and it was this that set him on a journey that eventually saw him dominate the stretch of land that was located from the Chinese Pacific Coast through to the Adriatic Sea. Genghis was an effective and diplomatic leader and there have been few that have ruled over as much land before him or since. If luck is on your side, you could find charming Khan showering you with gifts and some of his loot too.

When it comes to the symbols there are a few surprises that you may not expect to find with this theme. The low paying symbols are the playing card tiles 10 though to Ace which have been crafted in an effective calligraphy style. These symbols are followed by the five higher paying symbols that are made up of coins, vases, flowers, elephants, and the man himself Temujin. The symbols are expertly executed with an effortless style and stunning decoration.

Before you can proceed with the gameplay you need to choose the bet you are most comfortable playing with, and there is a rather odd range with bets starting from a minimum of 38p per spin up to £190.00 per spin, and thanks to this wide betting strategy this slot will appeal to a wide audience of players. When it comes to the volatility the developers have given the slot a 5/5 rating which denotes this as a highly volatile slot. The return to player sits at 96.55% which is also high and the potential including the jackpots is a welcome statistic too.

Temujin Treasures plays out over 5-reels and 4-rows and Pragmatic Play have dropped the fixed pay lines that they are known for and used 1,024 ways to win. Win combinations that do not have the benefit of multipliers are not the most lucrative and landing five of the higher paying symbols pays out a modest 0.26x to 2.6x your stake. The developers have cleverly made up for this with a host of features which make the slot more appealing. 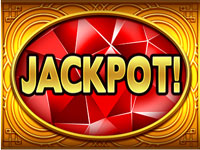 When it comes to the features this slot offers the lot, both big and small which are active at various points of the game. The Fortune Wheel is the key to activating most of them and this is joined by both firecracker symbols and symbol transformations that you will come across in the Wild Switch feature.

Landing 6 of the same symbols on your 2nd, 3rd, and 4th, reels will see the Wild Switch feature step in and transform them into wilds. The amount you win is calculated when all the new wilds are in position. The wild symbols will only ever appear on your middle reels to replace any pay symbol to complete a winning combination.

The red gold dragon is the game’s scatter and as so holds the key to landing the best riches that are on offer. If you land three you will launch the wheel feature, which spins and then will reward you with one of several prizes. These prizes could be a bet multiplier, free spins, one of the four fixed jackpots the Grand, Major, Minor or Mini and pay out 28, 88, 288, 8,888x your stake, respectively. If you get lucky and win a jackpot or bet multiplier the wheel re-spins and rewards you with more prizes. Should you get 5-wheel spins in a row the 6th wheel spin just contains free spins.

You can win from 6 to 50 free spins from the wheel and these are made extra special by the introduction of the firecracker symbol as when it lands it rewards you with one of the following:
- Free game trigger with 1 – 5 additional spins
- Money values where a random amount from 100x to 5,000x your bet
- Wild multiplier with a determined value between 1x, 2x, 3x, or 5x applied to the total spin win. It multiplies wins from other multiplier money value or if you land the jackpot on the same spin the number of jackpots that are awarded are equal to the multiplier
- The jackpots that include the Major, Minor, or Mini
You can also use the buy in function to fast track your way to the bonus however this will cost you 100x your total bet.

If you are keen on this type of slot Temujin Treasures is a veritable Asian feast that will have everything to keep players entertained. It is vibrant and in places loud and over the top, you get lions, dragons, coins, and everything in between! There is never any doubt as to the slot you are playing, probably the best bit for me was the fortune cookie messages that go along with wins and will give you a laugh or two. The slot has been designed with classic Asian lines with lots of gold, red and green and this is completed perfectly by the Eastern inspired soundtrack.

When I tested the slot one massive plus for me was the potential as this is excellent offering a sound 9,000x the stake. Like most slots in this genre Temujin Treasures is aimed at a certain type of audience and may struggle to attract casual passers-by. I enjoyed the slot and would give it a rating of 8/10 and recommend it to all.

What is the RTP in Temujin Treasures?

What is the volatility of this slot?

Temujin Treasures is rated as a highly volatile slot, with the developer rating of 5/5.

What is the bet range of this slot?

Can you buy into the bonus feature?

Yes, you can buy into the bonus feature and it will cost you 100x your total bet.