for playing with The Amazing Money Machine:
TAGS responsive 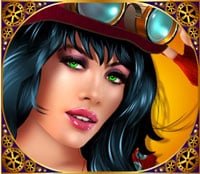 From the consummate slot providers Pragmatic Play comes this latest online slot in their canon – The Amazing Money Machine. This slot is very much inspired by the steampunk genre of literature which itself is a sub-genre of the more widely known science-fiction genre. Its main inspirations are 19th-century machinery powered funnily enough by steam. The aesthetic is what is termed retro-futuristic, describing a look that takes a style from the past and redesigns it to inhabit a fantasy future.

When it comes to the features for this slot, there are 3 main bonuses that players should be paying attention to. The first is the Amazing Money Machine feature. This feature is related to the 4 different money symbols that players will see on the reels. These are the Money symbol, Mystery symbol, Wild Money symbol and Jackpot Money symbol. Next is the Money re-spin feature. This is a fun feature that plays out on a separate set of reels with sticky symbols and random additions of more free re-spins and money symbols. Lastly, there is the Jackpot feature, which gives you the chance of winning 1 of 4 jackpots.

When we first looked at the theme for this game, it immediately reminded us of the classic film ‘Chitty Chitty Bang Bang’ and all of the fantastic gadgets that were strewn about in the various workshops in that film. The Amazing Money Machine is a machine in this game that has all sorts of leavers, cogs and wheels as well as gauges, all of which fit perfectly with the game’s theme. If you imagine the film ‘Wild Wild West’, you’ll get a good sense of this game’s aesthetic.

The background for this slot in stark contrast to the playing board is a fairly simple design, the background is just a dark blue wallpaper design. There isn’t too much to be said about this background apart from that the wallpaper seems to be Victorian in style, which would fit the steampunk era well and that it looks to be richly textured.

The board on the other hand is what the game is referring to when it says the Amazing Money Machine. Its crazy contraption vibes give off a fun crazy inventor feel which works perfectly with the overall theme of the game.

The symbols are split into a range of different categories. The first category is the low-paying symbols, these comprise the 10-K symbols decorated in various block colours. Joining these on the reels are the picture symbols which are worth much more than the standard card symbols. These are made up of goggles, a ray gun, an airship as well as male and female engineers. The most lucrative of these symbols is the female engineer. She pays out at 10x your stake for 5 on a pay line. The last category of symbols is the specials. In this category, we have the blue gemstone which is the wild as well as 4 money symbols which all have different prize meanings as explained below.

Further information regarding the slot, including a display of the paytable, can be accessed by clicking on the settings menu. The spin button is located on the right-hand side of the reels. You can set up auto spins in the game’s menu.
The volatility for The Amazing Money Machine is extremely high. The return to player percentage for The Amazing Money Machine is 96.42%, which is a little over average. The biggest payout that players can win on one spin is 5,100 x your total stake.

There are 3 top features included in this game. The first of which is called the Amazing Money Machine feature. This feature is linked to the 4 money symbols which join the normal symbols on the reels. These comprise:
The Money Symbol: This gold coin has a cash value attached.

The Jackpot Money: This appears during the re-spins only and adds to the Jackpot Meter.
If you are lucky enough to land 3 of these symbols simultaneously on the central 3 reels, this will increase the size of the playing window. Another one or two rows will be added to the window, upping the number of pay lines and lucrative potential.
The second feature is the Money re-spin feature, landing 5 or more of the money symbols as described above triggers this feature. This specific feature plays out on a new playing window which is either 5×3, 5×4 or 5×5 in size. When you are taken through to this mini game, all of the symbols on the board are either made up of blanks or money symbols. You are then given several re-spins which correlate to the number of scatters that you landed.

Every time that a new money symbol lands on the reels it is frozen in its position and 1 extra re-spin is added to your total. The Money Machine can also randomly throw more money symbols or re-spins at you.

At the end of the feature, when you have used all your re-spins, the mystery symbols and wild money symbols are both revealed and that cumulative value is added to your total from the other money symbols giving you your overall prize amount. Filling all the available spaces on the special re-spins board gives you an initial payout and then another round of re-spins.
Lastly, we have the Jackpot bonus. To trigger this feature players must either land 3 bonus symbols on the reels on the same spin in the base game. Collect 3 Jackpot bonuses in the re-spins or land an instant jackpot symbol.

Doing so will give players a chance to pick from a selection of coins, all of which have hidden jackpots behind them. To win, you must uncover 3 matching jackpot symbols. There are 4 different size jackpots on offer:

Steampunk fun has never looked so good. With plenty of fun bonuses to get stuck into, a chance at winning a jackpot and a smooth gaming experience, Pragmatic Play should have no problem finding players to take on this game. The only thing to bear in mind is that it is an extremely volatile slot, so you may be waiting a while for any bonus content to trigger.

Which designer created this slot game?

The Amazing Money Machine was created by Pragmatic Play.

Is this game mobile friendly?

Yes, The Amazing Money Machine is optimised for all devices.

What is the return to player percentage for The Amazing Money Machine?

What is the maximum win available for this slot game?

The top payout available for The Amazing Money Machine is 5,100 x your stake.

for playing with The Amazing Money Machine: