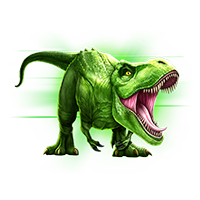 10x Rewind is the latest creation from the prominent game designer 4 The Player. The premise for this game is time travel, not just in the sense of the theme taking us through various points in time, but the game actually rewinding your spins to make you feel like you are time travelling in real life. This experience is provided by the Rewind Time Win Spins feature, which lets you play out your previous spins in reverse order. With an impactful and novel theme an awesome central feature, 10X Rewind is one of the provider's most exciting free slots online ever produced.

You may think that having just one feature might make this game rather dull, yet you will find that the Rewind Time Win Spins feature is more than diverting and varied enough to keep things interesting. To trigger the feature, players must land 3 scatter symbols on the reels at the same time. You will then be given a choice of triggering scatters to choose from, which will reveal how many free spins you have won. The feature will then play out your previous spins with potentially very lucrative consequences, as modifiers can also be added at this point. This feature will be explained in more depth later on in the review.

The theme for this game, as we have already established, is time travel. When we say this, though, what we mean is that the game has that "Back to The Future" kind of aesthetic of 80s' inspired time travel. This means that the board is full of bright colours and uses the same typography and artistic choices as classic movies from that period. The most instantly recognisable time-travelling aspect to this theme is the symbols which are various tableaus from famous points in history such as Knights Lancing, the Pyramids being erected and Neil Armstrong standing on the moon.

The background for 10x Rewind is a strange space-time tunnel into which players are perhaps supposed to be hurtling through to reach these different places in time. Its deep purple colours with dynamic shooting stars of green and orange are supposed to give the game a feeling of the unknown and the fantastical. If we are honest, though, they could have tried a little harder with this design, as it isn't overly convincing or terribly high quality, which is a shame because the rest of the game holds up reasonably well.

There isn't much to say regarding the playing board apart from that it is almost invisible and lets the symbols and background do the majority of the heavy lifting when it comes to the visual impact of the slot.

The symbols are split into two groups, one regular and one special. The regular symbols, as mentioned, are different snapshots in time. The least valuable of these symbols is the green T-Rex which pays just 1.5x the stake for the top combination. Next is the Viking Ship, followed by the Train, the Flying Car, the Pyramids, the Greek Temple and the Gladiator. The most valuable of these symbols are the Knights, the Cowboys and the Astronaut. The Astronaut pays 6x the stake for the top combination. On the other hand, the specials comprise the Time Traveller wild, which substitutes for all other symbols barring the scatter, and the win spins scatter, which is portrayed as an atom. 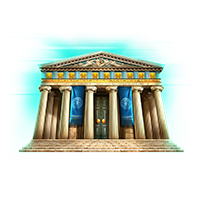 10x Rewind is played on a 6-reel, 4- row game board with 4,096 pay lines. To create winners in this game, players must match 3 or more symbols in combination from left to right on the reels. The betting range for 10x Rewind is 10p to as much as £20 per spin. To change your betting level per spin, use the bet adjuster tool located at the bottom of the playing window.

The volatility for this slot is rated in the high end of the spectrum. The return to player percentage 10x Rewind is 96.47%, which is slightly above average. The biggest payout that players can win on one spin is 20,000x your total stake.

To trigger this game's only feature, the Rewind Time Win Spins bonus, players need to land 3 of the scatters on reels 1, 3 and 6 on the same spin. The game will then give you the choice of one of the scatters, which will reveal how many free spins you are granted, in the range of 5-10.

Once this has been decided, you will replay the previous spins at the same stake level as the one you currently have. If you had a poor run of spins before you triggered the feature, this might be a little annoying. However, if wins didn't happen, random wins are generated for you.

These wins can also be boosted by three multipliers which also come into play in this bonus. These modifiers are brought into play every time an additional scatter is landed from within the bonus game. Each scatter grants either extra win spins, an instant cash prize or a multiplier boost to your score.

The multiplier can also increase without limit, so the more scatters you land, the better. The bonus guarantees that you land a minimum of 5 wins every time you trigger the feature.

The time-travelling theme is a fun one that everyone can enjoy. Yet the playing of your old spins is the most novel aspect of this game and one that, if you are lucky, could be potentially very exciting. Thankfully, even if you didn't have the best run before triggering the bonus, modifiers and random wins mean you will never come away empty-handed. RTP and the top payout are encouraging too.

How many reels does 10x Rewind have to play on?

This game has 6 regular reels.

The top payout available for this game is a generous 20,000x you stake

Yes, 10x Rewind is optimised for all mobile devices.

What is the max RTP for 10x Rewind?

The maximum return to player percentage for 10x Rewind is 96.47%.

What is the betting range for 10x Rewind?

for playing with 10x Rewind: