Pyramid Quest is an Egyptian-themed slot game that is free to play for those over 18. Designed by Espresso Games, Pyramid Quest takes the classic Egyptian theme and twists it into something innovative, smooth, and fun to play. With easy to understand design, there are no barriers to play, and the odds work in your favour as a player. Pyramid Quest has high enough stakes to impress well-seasoned players and a clear enough layout to work as a great first game for new players.

As mentioned before, Pyramid Quest uses an Egyptian theme for its design. Therefore, it would be easy for Espresso Games to fall into the trap of every other Egyptian-themed slot game’s design - as it is a very popular theme for free online slots. But Pyramid Quest avoids these cliches and instead opts for a modern-looking design while still paying homage to the traditional look.Pyramid Quest has an all-black background of hieroglyphics, giving it a sleek and modern look. The reels are designed as a rolled-out scroll on the slot. The slot itself is split into two sides, forced apart by a red scarab gemstone in the middle. This red scarab gemstone is lush and shiny, only made brighter by its strong contrast to the black background. This red scarab gemstone is the spin button.To tie the experience together, Pyramid Quest has Egyptian-style music playing in the background, transporting you to the world of the game. 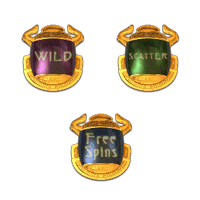 Pyramid Quest works as most slot games do. As the game begins, a short introduction outlines to the player the environment and the map for the game.In terms of control, there is the red scarab button that we mentioned earlier, working as the spin button. Everything is laid out for the player, with the control panel at the bottom of the screen. On the left side, there is the total bet and total lines displayed. On the right side, there is total win and total balance.When you want to adjust your bet, you can do so at the bottom right. There is a left and right arrow you can use to set your bet as you want. Auto spin is to the left of total bet.Once you’ve played a few rounds and hopefully won at some point, an animation will appear at the screen’s centre.The ultimate aim of the gameplay is to navigate through the map to the top prize at the end of the game. Navigating through the map is simple: you must land a pawn symbol on the centre reels. You are racing against the other players to reach the final destination first.

The symbols work well to draw the player into the world of the game.

There are certain symbols to look out for in the game for extra bonuses. These features will help you to win big or transform your winnings into something much bigger.The purple scarab symbol is a wild symbol. If you stumble across this one, it will substitute itself for any other symbol to complete your active pay line. Furthermore, when you use a purple scarab, your winnings will be multiplied by two.The green scarab symbol will payout from any place on screen. Whenever you use a green scarab, each different one will get you a multiplier applied to your total bet. The maximum multiplier you can get from scarab symbols is multiplied by five.Finally, the blue scarab symbol, if found, will give you free spins. This is as long as you land two or more of these spins. The maximum amount of spins you can get is twenty, and the minimum five free spins.

Pyramid Quest is a perfect blend of nostalgia and innovation, making it perfect for pretty much any player. The features and map layout allows for long-term play that doesn’t get boring.

Is Pyramid Quest free to play?

Yes, Pyramid Quest is free at point of access to play.

Does Pyramid Quest have bonus opportunities?

Yes, Pyramid Quest has three bonus opportunities to look out for. The purple, green, and blue scarab symbols will award you with multipliers and free spins.

Is Pyramid Quest good for beginners?

Yes, Pyramid Quest is easy to navigate and so perfect for beginners.

Who is the game provider of Pyramid Quest?

Espresso Games is the designers behind this game.

When was Pyramid Quest released to the public?

Pyramid Quest was released on April 2015.

for playing with Pyramid Quest: