Deadwood is the latest slot from Nolimit City and will take you to the American Wild West which is a firm favourite with actors and writers alike whilst also inspiring childhood games and become the descriptive for a host of country tunes. It is what made the legends of heroes, bandits gold rush and baddies to the point where they are known worldwide. Apart from Dead or Alive from NetEnt there are few slots that have used this theme as dynamically as Nolimit City did with their 2019 release Tombstone.

Their latest slot takes over from where Tombstone left of and provides a far brighter and bold sequel. The reels are expanded to provide an extra symbol to each reel giving 576 ways to win as opposed to the 108 in the original. The volatility is still as high, the hit rate has been boosted so you can benefit from a more balanced and better gaming experience.

There is no disappointment when opening this slot and if you were to compare Tombstone and Deadwood you can see just how far this small studio has come in just a year. No longer do they rely on the cartoon style graphics that featured in Tombstone, Deadwood is much more mature and although both games are played over similar ground the difference is quite significant.

The slot takes place in the dusty main streets of Deadwood which is located to in an old Western town in the middle of nowhere. The reels sit within a metal box and the symbols sit on wooden planks whilst a tranquil soundtrack round everything off nicely. 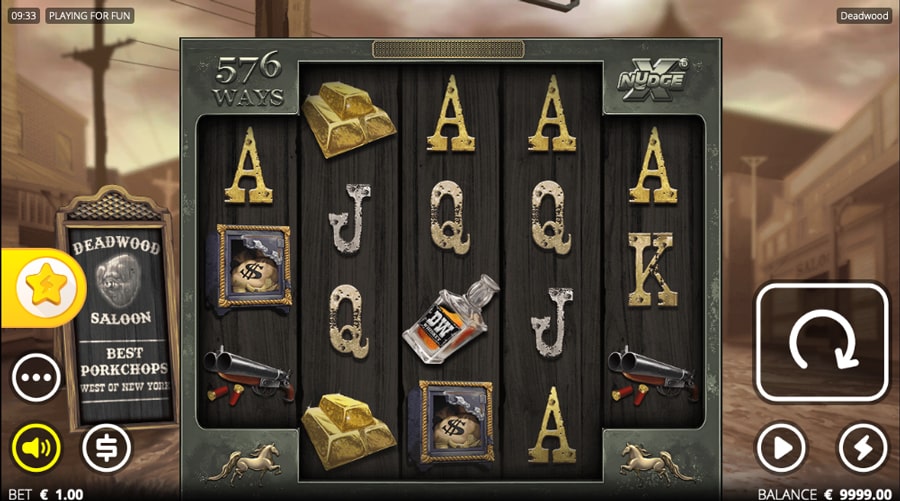 When it comes to placing your bets, the slot can be played from as little as 10p per spin up to a maximum of £100 per spin making it a slot that will appeal to a wide variety of players. There are 10 regular symbols with the low paying represented by the usual playing card symbols which are in the form of rusty old metallic signs with bullet holes and will pay you 1x to 1.25x your bet when you land five of a kind. When it comes to the high paying symbols you can expect to come across Deadwood whisky bottles, gold watches, money safes, double barrel shotguns and gold bars. The gold bars are the most valuable and landing five on a pay line will reward you with 3.75x your stake.

Whilst the return to player is slightly lower it still sits at a respectable 96.03% and with this slot the return to player is set out differently so you are in effect playing with a totally unique slot game. Where in Tombstone 2/3 of the RTP is allotted to the features, Deadwood works the other way around. This provides more pay outs in the base game, which is why there is the increase when it comes to hit frequency. 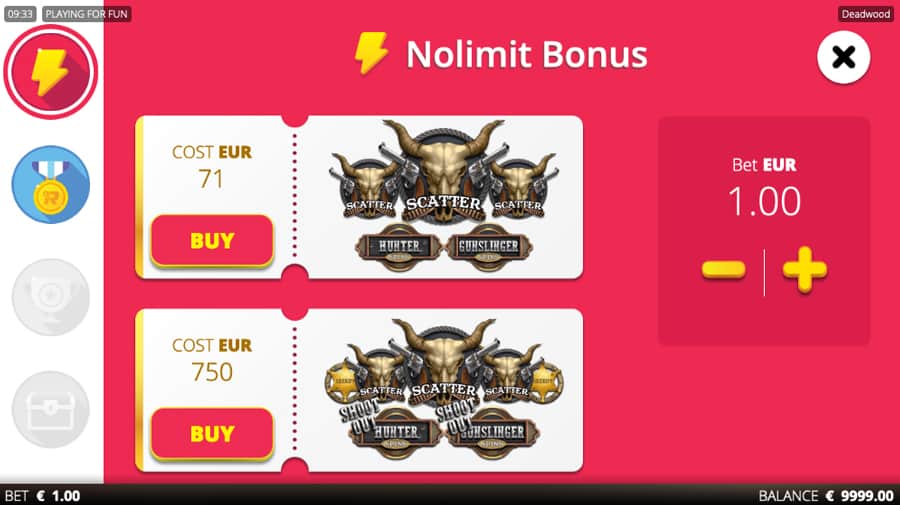 Bonus and Features in Deadwood

There are some excellent bonuses and features on offer in Deadwood, the first of which is the shoot out gunslinger spins. If you are au fait with the original Tombstone slot you will find that the base game features are familiar. The hunter wild is the most frequent and can show up fully stacked and land on the three middle reels. When it is only partly on display it nudges into place courtesy of the xNudge feature add then covers the entire reel and increases the multiplier by one for every nudge. Even better if you land more than one wild the multipliers are combined too.

The shootout feature is activated when the sheriff badge lands on your 1st and 5th reels in the base game and once activated any low paying symbol in view on your middle three reels change into wilds.

There are two free spins game in Deadwood and landing three buffalo skulls in view will give you the choice of whether you collect 8 gunslinger spins or 8 hunter spins. The gunslinger spins offer high risk and high potential and any hunter wilds that land on your reels will trigger an unlimited win multiplier that stays in play for the whole round. With every nudge of the hunter wild the win multiplier goes up and never resets, plus an additional spin is added to the total if you land a sheriff badge on your 1st and 5th reel.

The hunter spins are the less volatile choice, and, in this feature, you are guaranteed to have one hunter wild land on each spin and this resets between spins. From here the rules work in the same way as the gunslinger with regards to the sheriff badge.
The shoot out free spins feature is your key to the biggest wins and this feature is triggered by landing 2 sheriff badges plus 3 scatters in the base game or landing 2 sheriff badges during either of the free spin’s rounds. If you activate the feature in the base game, you get to choose either 10 shootout gunslinger spins or 10 shootout hunter spins. When this happens all low paying symbols that are on your three middle reels change into wilds.

There is no doubt that Deadwood can stand firmly on its own feet when compared with Tombstone, both slots share similar features when it comes to the base game but there is no mistaking that Deadwood is an independent game. Granted the base game may seem more forgiving thanks to the increased hit frequency and extra RTP. Deadwood is a far busier game with everything activating more often.

Overall, I found Deadwood to be an outstanding slot which reaches a high level of expectation, visually this slot is far superior to the first and it is great that the developers have gone to the trouble to create a different math model. Due to the changes the slot is rather unique and provides an interest experience. Do not just take my word for it, give Deadwood a spin or two I really do not think that you will regret it.